Fortnite has made quite a fuss, arising interest both within and outside the gaming community. Such a popular video game was going to go beyond online gaming into the real world. A manifestation of this is Fortnite action figures. And if you’ve long been looking for high-quality Fortnite action figures, you are in the right place. 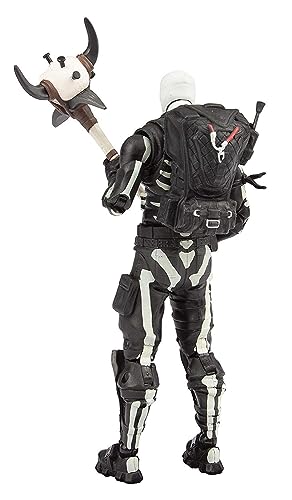 Let’s begin with the figure. It is one of those high-articulating figures which could be positioned in a wide variety of poses. It has got over 18 points of articulation, so whether you’ll be creating action scenes or letting your kid play with this figure, the Skull Trooper action figure should be able to satisfy you.

Also, this action figure is quite a tall one. Standing at about 6-7 inches, the Skull Trooper figure is the tallest on our list.

What about the included items? The Skull Trooper action figure comes with 4 accessories – back bling, an epic bolt-action sniper rifle, a Death Valley pickaxe, as well as a display base. Overall, this figure could be used either for posing or for displaying. 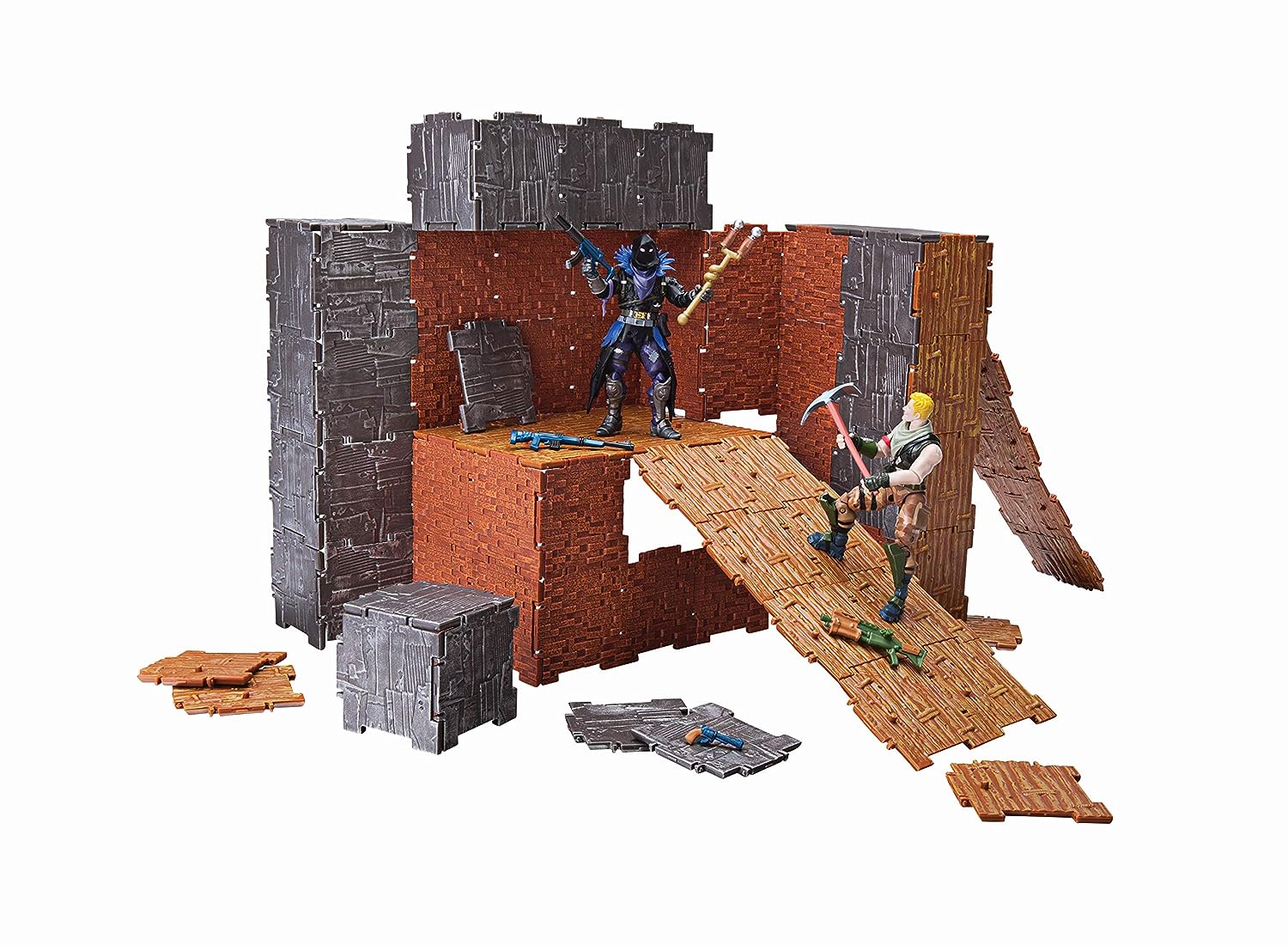 Fortnite Turbo Builder Set includes not only mere action figures. It is an entire set of Fortnite-themed items.

Namely, this set includes 27 metal, 27 stone, and 27 wood building materials. Also, it comes with 4 weapons and 2 harvesting tools for the figures. And while this already seems rather rich, an even better thing about this set is that it is expandable. If you purchase additional materials for it, you could get much more from this set.

But when it comes to articulation, the figures aren’t that far behind the Skull Trooper. They both have 19 points of articulation, as well as are pretty highly detailed.

Needless to say, such beauty is going to cost some good money. But if you have the budget, the Fortnite Turbo Builder set will have a lot to offer to you.

Fortnite Moonwalker action figure is a slightly different product. That’s because it is somewhat less oriented on being posable and more on being displayed.

Just have a look at the package: it comes with a plastic protector box designed to safeguard the action figure during display. This display box has a peelable protective film to keep the surface of the box away from dirt and dust. Besides, when formed, the box is designed to have good structural integrity so it doesn’t look ugly on the shelf.

The Moonwalker action figure itself is a rather detailed one; we have to say. It looks much more detailed to us than the other figures on the list. For a display figure, this is going to be perfect.

In terms of posing capacity, however, the Moonwalker figure isn’t the best. It has some articulation to it, but not as much as other figures on our reviews. So basically, one could say that decreased articulation is the price of the higher detail in this figure. It’s up to you to decide whether this is good or not. 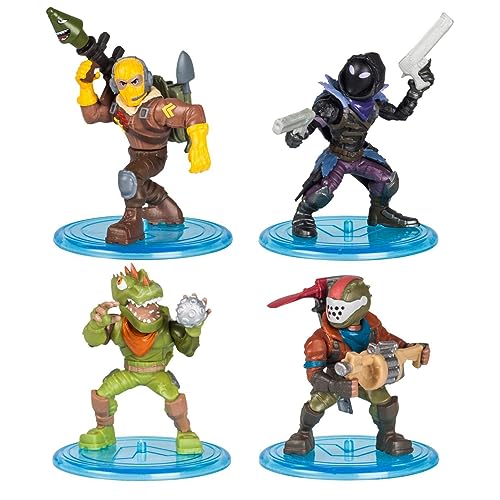 If your budget is limited, then the 4-figure Fortnite Battle Royale Collection may be a good option for you. It isn’t too cheap per se, but it is rather inexpensive for the amount of stuff included in it.

As you could have guessed from the name of this set, it comes with 4 action figures – Raptor, Rust Lord, Rex, and Raven. Sized at 2 inches, these action figures are rather small. At the same time, it should be mentioned that they have a good level of detail to them, though definitely not as good as in the Moonwalker action figure we’ve just reviewed.

Like the Moonwalker figure, these 4 action figures have limited articulation in them. They arguably are made more for displaying, especially given that this set comes with 4 display stands.

And aside from the figures and stands, the Battle Royale Collection includes 8 swappable accessories for the characters.

A thing that you’d need to keep in mind with this set is that its small items pose a choking hazard. Not that other sets don’t have the same issue, but your kids will require more attention since this set has a lot of small items. 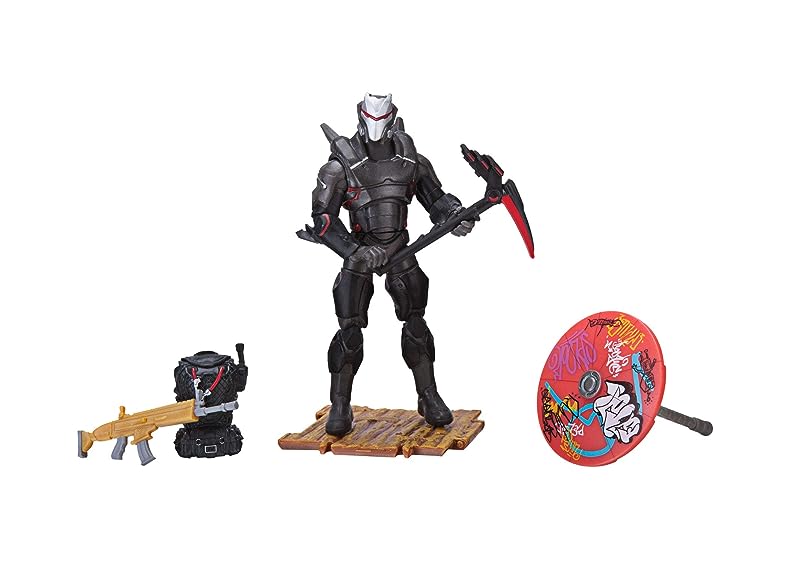 And the last action figure set on our list is Fortnite Omega Early Game Survival Kit. This kit is very similar to the Skull Trooper set, but there are some notable differences.

The main difference between the sets is that the Omega figure in this set is 4 inches tall, about 2-3 inches shorter than the Skull Trooper figure. So Omega is sized the same as Jonesy and Raven in the Fortnite Turbo Builder Set.

As for the accessories included, this kit comes with the Onslaught harvesting tool, the Precision Back Bling, a Wet Paint Glider, a Legendary Assault Rifle, and the wood building block we already mentioned.

That’s all for under $100 Fortnite Action Figures!

A collector would want to have the highest-quality Fortnite action figures to showcase. And we think all the figures on our list deserve a place on the shelf.

So have you made your choice? If so, you should probably go and get it!